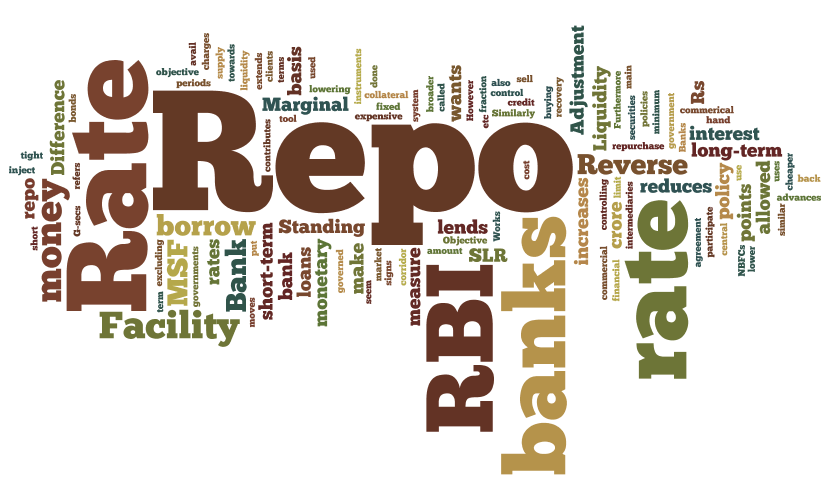 Repo rate, or repurchase rate, is the rate at which RBI lends to banks for short periods. This is done by RBI buying government bonds from banks with an agreement to sell them back at a fixed rate.

Bank Rate and Repo Rate seem to be similar terms because in both of them RBI lends to the banks. However, Repo Rate is a short-term measure and it refers to short-term loans and used for controlling the amount of money in the market. On the other hand, Bank Rate is a long-term measure and is governed by the long-term monetary policies of the RBI. In broader term, bank rate is the rate of interest which a central bank charges on the loans and advances that it extends to commercial banks and other financial intermediaries. RBI uses this tool to control the money supply.

Repo Rate and Reverse Repo rate are main policy instruments of RBI. This corridor between Repo and Reverse Repo is called Liquidity Adjustment Facility. While the minimum credit limit under Liquidity Adjustment Facility is Rs. 5 crore; the same is Rs. 1 crore under Marginal Standing Facility. The rate of interest in MSF is 1% (100 basis points) above Repo Rate and 2% (200 basis points) above the Reverse Repo Repo Rate. Further, in Repo, the banks are allowed to put all G-secs excluding the SLR securities; while in MSF, they can use fraction of SLR also as collateral. Furthermore,all clients of RBI such as Banks, NBFCs, governments etc. can participate in Repo; only commerical banks are allowed to avail MSF.

When RBI reduces the Repo Rate, the banks can borrow more at a lower cost. This contributes to lowering of the rates. Once there are signs of recovery, the RBI increases the rates and moves towards a tight monetary policy.