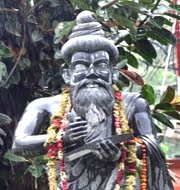 The 12-foot-tall stone statue of renowned Tamil poet and philosopher-saint Thiruvalluvar was inaugurated at Mela Bhawan in Haridwar, Uttarakhand by Chief minister Harish Rawat.
The process introducing Thiruvalluvar statue in Uttarakhand was initiated by former Bharatiya Janata Party (BJP) MP from Uttarakhand Tarun Vijay.
Initially the statue was planned for installation on the banks of Ganga River at Har ki Pauri in Haridwar in June 2016 but it was delayed after it faced opposition from priests and saints.

Other Statues of Thiruvalluvar