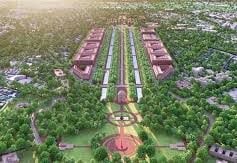 The redevelopment work of the central vista avenue has started with the Bhoomi Pujan ceremony. Central Vista Avenue is the area surrounding Rajpath. The Bhoomi Pujan was performed by the Union Minister for Housing and Urban Affairs, Hardeep Singh Puri.

The area was retained by the Government of India after independence. Because of safety concerns proposals for new structures started coming to forth after independence. In the line, the landscape of the Central Vista Avenue was altered after Independence. In 1980s, new rows of trees were also added. Further, in order to improve the north-south connectivity a new road Rafi Ahmad Kidwai Marg was constructed.

The project is the ongoing redevelopment plan to revamp the Central Vista which is the central administrative area of India located near Raisina hill in New Delhi. The area comprises of the government and parliamentary offices of India. It is called as the “Power Corridor” of India. The project has been started with the objective of improving the infrastructure for the Government of India. The redevelopment plan also comprises of the retrofitting and refurbishing some of the heritage buildings to make them functional and safe for future. It will convert North and South Blocks to publicly accessible museums. A common Central Secretariat will be created to house all ministries. Apart from that, a new Parliament building will also be constructed and its seating capacity will be increased.

History of the Central Vista

The area was designed by Edwin Lutyens and Herbert Baker at the time of British colonial rule.  Its foundation stone was put in the year 1921. In the year 1927 the building was inaugurated by the viceroy Lord Irwin. In the year 1947, it became the seat of new government of India.