Recommendations of Task Force on Simplification of Direct Tax

Recommendations of the Task Force 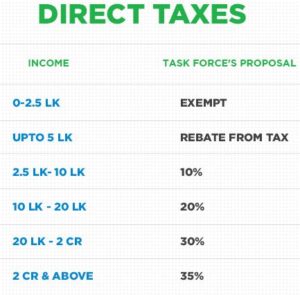 The government has not yet accepted the proposals of the task force and the Finance Ministry is deliberating on the report before making it public. If the proposals are accepted then people can save up to Rs 1.5 lakh per annum in their tax outgo.

The recommendations are based on the studies conducted on the sensitivity of consumer spending to changes in tax rates indicate that marginal propensity to consume could increase significantly with the reduction in tax rates, particularly in the middle-income group.