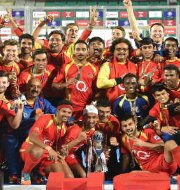 Hockey India League is organized by Hockey India. Number of teams is Five which are franchisee based. Teams have players from India and around the world.  The event is sanctioned by International Hockey Federation (FIH).