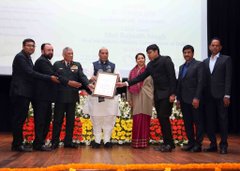 The Defence Minister(Raksha Mantri) of India, Rajnath Singh presented the Raksha Mantri’s Awards for Excellence 2019 at the National Institute of Defence Estates Management in Delhi Cantonment on Thursday, 26th December 2019. The Minister addressed the gathering at the awards ceremony and called upon the Cantonment Boards to be gentle towards the unprivileged people living within the cantonment premises so that rather than being in fear of the officials, they should feel protected.

The Minister commended the role played by the cantonment boards across the country in Swachh Bharat Abhiyan and also made the cantonment areas free from open defecation. The Minister also appreciated the various tasks carried out by the Cantonment Councils under the ‘Digital India Programme’ to make public services easily accessible, efficient and faster for the people.

The Raksha Mantri’s Award for Excellence for the Defence Estates was started in 2013 to recognise the achievements for the defence estates in the field of land management and public services based on their work in innovation, health, cleanliness, digitization and education. General Bipin Rawat, the Chief of Army staff and other senior Civil officials and Military personnel attended the awards. Awards were presented in 7 different categories, some winners are: for digitization: Cantonment Board, Delhi and for Innovation in Public services: Cantonment Board, Mhow were awarded.

The Defence Minister also released ‘Pratibimb 2019’ which is a booklet that comprises of a brief description of the works done along with photographs by all cantonment boards in the year 2019, during the occasion of ‘Clean India Drive’ and to mark the 150th Birth Anniversary of Mahatma Gandhi.