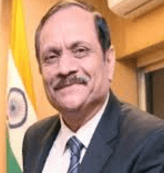 IPS officer Rajiv Rai Bhatnagar has been appointed as the Director-General of the Central Reserve Police Force (CRPF). The appointment has come two days after 25 CRPF personnel were ambushed by Naxals in Chhattisgarh’s Sukma district. The CRPF was functioning without a head for the past two months after the retirement of K. Durga Prasad on February 28, 2017.
Rajiv Rai Bhatnagar is a 1983 batch IPS officer belonging to the Uttar Pradesh cadre. He is the Director General of the Narcotics Control Bureau.
In another key appointment, IPS officer R.K. Pachnanda has been named the director general of the Indo-Tibetan Border Police (ITBP). R.K. Pachnanda is a 1983 batch IPS officer of West Bengal cadre. He will take charge after the retirement of Krishna Chaudhary in June-end.