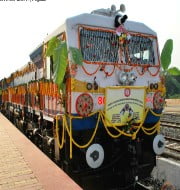 Background
The Lumding-Silchar Gauge Conversion Project was sanctioned by Government of India in 1996-97 under the Northeast Frontier Railway. The strategic project was declared as a National Project in 2004. The project was hit by insurgency from 2006 to 2009 but later the Territorial Army was deployed to take on the insurgents.