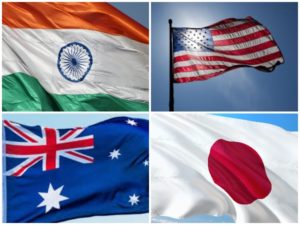 The Quadrilateral Security Dialogue or QUAD is a strategic security dialogue involving India, the United States, Australia and Japan. It was initiated in 2007 by Japanese President Shinzo Abe. It ceased to exist in 2008 after Australia’s withdrawal and later revived again during the 2017 ASEAN Summit in Manila.