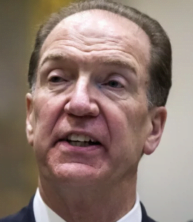 The US President Trump has nominated David Malpass for the post of the president of the World Bank.

David Malpass had held senior roles in the US Treasury during the Reagan and George HW Bush administrations. He has also served as chief economist at Bear Stearns bank. Later he founded research group Encima Global and held a number of directorships at finance firms.
After the assent of Trump to the US Presidency, Mr Malpass took up a senior role at the US Treasury and was the undersecretary for international affairs.

Executive directors of the World Bank can nominate candidates for the post. The candidate must be citizens of one of the bank’s member countries and cannot be a bank governor, executive director or alternate. Executive directors are expected to clearly communicate and define the nomination period.
If there are more than three candidates, there will be a shortlisting process to narrow the field through an informal straw poll. The shortlisted candidates will be interviewed by the board and then the board will make a final selection through a majority vote.
To win the presidency of the World Bank, a candidate must win approval from the institution’s executive board, which has 25 members. The US holds a 16% share of board voting power hence more often it is the US-backed candidate gets elected for the post of the president.