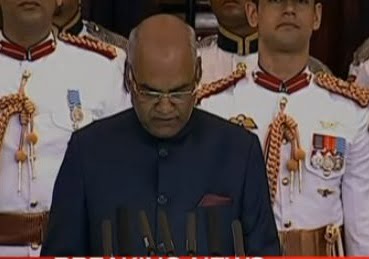 President Ram Nath Kovind has called for simultaneous elections to Lok Sabha and state assemblies. He made this state while addressing the joint sitting of Parliament on the commencement of the Budget Session.
He made this statement arguing that frequent elections impede speed of development as officials have to assist in conducting polls. He called for sustained debate on subject of simultaneous elections and urged all political parties to arrive at consensus on this issue.

The idea of ‘one nation one election’ has been proposed for many years starting with Law Commission suggestion in 1999. Most recently, Parliament’s standing committee 2015 report suggested holding simultaneous election to save public money and end policy paralysis because of impact of the model code of conduct. It had pegged the cost of holding elections for Lok Sabha and state assemblies at Rs. 4500 crore. Prime Minister Narendra Modi too had pitched for this idea.