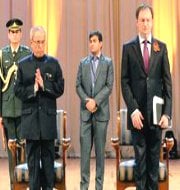 President Pranab Mukherjee inaugurated Namaste Russia, a festival of Indian culture in Moscow during the last leg of his tour in Russia.
Namaste Russia will be six month long festival i.e. form May to November 2015. The festival seeks to enthrall the Russian audience with cultural events from India.
The festival is being hosted under the patronage of Indian Council for Cultural Relations (ICCR) and Ministry of Culture of the Russian Federation. Russian State Concert Company SODRUZHESTVO and Jawaharlal Nehru Cultural Centre at the Embassy of India in Moscow are the organisers of the festival.
As part of the inauguration of this festival, Kathak dance performance was given by a team of dancers choreographed by Padma Bhushan Kumudini Lakhia.
This festival seeks to enhance and boost cultural bonds that build solid bridges of friendship and understanding between peoples of both countries.
The festival will be toured in various regions in Russia that will help people living in different regions of Russia to deepen their engagement with contemporary and classical Indian Culture. As part of this festival, an exhibition of Indian painting and sculpture will be also organized.