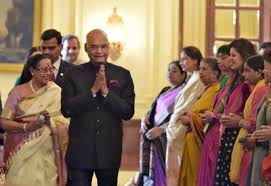 President Ram Nath Kovind has felicitated 112 exceptional women achievers at Rashtrapati Bhawan in New Delhi. These women achievers ‘FIRST LADIES’ are those who are first to set milestone of achievement in their respective fields. This ‘First Ladies’ is second leg of the ‘100 Women Achievers’ campaign of the Ministry.

These 112 women were selected after extensive research process by Ministry of Women & Child Development (WCD). They are those who have been first in any field like first woman judge, first woman porter, first woman to head missile project, first para-trooper, first Olympian among others. Their felicitation aims to inspire other women to break the glass ceiling and do women of India proud.
Among those who were honoured by President include

Every year on March 8 (Women’s Day), WCD Ministry honours Nari Shakti Puruskars to those women who have contributed to society but have remained unsung. These awards are conferred by President of India at Rashtrapati Bhawan. The WCD Ministry in 2015 had collaborated with Facebook to recognise ‘100 Women Achievers’ who have excelled in diverse sectors of public work. It started to recognise different ways those women who have broken the glass ceiling and ventured into unusual fields.