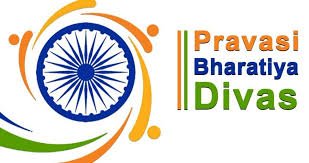 On 9 January 1915, Mahatma Gandhi returned to India from South Africa, to commemorate the return,  9th January was chosen to be celebrated as Pravasi Bhartiya Divas (Non-Resident Indian Day) in the year 2000 by the External Affairs Ministry of India with the aim to promote unity among the Indian diaspora and to mark the contributions of the overseas Indian community toward the development of the country.

From 2003, Pravasi Bhartiya Divas Convention is held every year which has played an important role over the years in creating a network among the Indian Community residing overseas and also had provided a platform to engage with the Government of India to share their experiences in various fields. This year marks the 18th edition of the Pravasi Bhartiya Divas Convention.

The logo of the Pravasi Bhartiya Divas Convention was selected through crowdsourcing, with an open competition inviting citizens to submit their designs for the logo at the MyGov web portal in the year 2016.