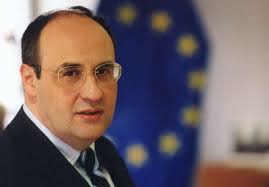 Portugal’s Antonio Manuel de Carvalho Ferreira Vitorino (61) was elected as next Director General (DG) of International Organization for Migration (IOM), an UN Migration Agency. He will succeed incumbent DG William Lacy Swing who will be stepping down after completing the second of two five-year terms. In this election for top most post of IMO (held in secret ballot), Vitorino defeated Costa Rica’s Laura Thompson who came second and US nominee Ken Isaacs who came third.

Antonio Vitorino had earned degree from University of Lisbon’s School of Law in 1981, as well as Master’s Degree in Legal and Political Science. He was elected to Portugal’s Parliament in 1980. In 1983, he was made Secretary of State for Parliamentary Affairs. He had served as Minister for National Defense and Deputy Prime Minister within government of Antonio Guterres, who is now United Nations’ Secretary General. He also had served as European Commissioner for Justice and Home Affairs from 1999 to 2004. He has been President of the think tank Notre Europe since June 2011.

IOM is UN Migration Agency and is leading intergovernmental organization that provides services and advice concerning migration to governments and migrants, including refugees, internally displaced persons and migrant workers. It is headquartered in Geneva, Switzerland.
It was established in 1951 as Intergovernmental Committee for European Migration (ICEM) to help resettle people displaced by World War II. It was granted Permanent Observer status to UN General Assembly in 1992. Cooperation agreement between IOM and UN was signed in 1996.
IOM works in four broad areas of migration management: Migration and development, Facilitating migration, Regulating migration and Forced migration. It has 166 member states and 8 states holding observer status. It has over 400 offices in more than 150 countries. It has more than 9,500 staff and 450 offices worldwide.