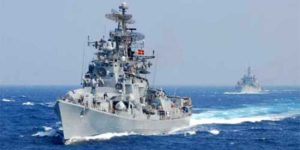 The exercise signifies the long-term strategic relationship between India and Russia.

Other Exercises between India and Russia

INDRA is a joint bi-annual exercise between India and Russia. It was begun in 2003. The exercise involves anti-submarine operations and live firing drills

Along with India, other countries such as Kazakhstan, China, Tajikistan, Pakistan, Uzbekistan, Kyrgyzstan also participated in the exercise.

The Defence relations between India and Russia have been built on five major components such as defence, politics, civil nuclear energy, space and anti-terrorism cooperation. Lately, the economic component has been added between the defence relations of the countries. The countries have set to achieve a target of 30 billion USD of defence trade by 2025.

India is currently the second largest market for the Russian Defence industry. In 2017, around 68% of Indian military hardware imports came from Russia.

Russians consider India as one of their top five friends along with China, Belarus, Syria and Kazakhstan.