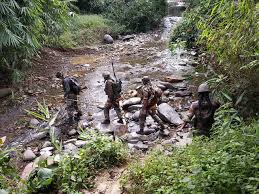 Starting from 16 May 2019, the armies of India and Myanmar carried out a 3-week-long coordinated operation in their respective border areas called ‘Operation Sunrise 2’ to bust terror camps. The operation was targeted at militant groups operating in Manipur, Nagaland and Assam. This was the 2nd edition of Operation Sunrise.

Participants: From Indian side besides Indian Army, troops from Assam Rifles were also part of operation.

Operation Against: During Operation Sunrise 2, the armies of India and Myanmar coordinated with each other to bust camps of several militant outfits, including NSCN-K (National Socialist Council of Nagaland-Khaplang), Kamtapur Liberation Organisation (KLO), United Liberation Front of Assam (ULFA) (I) and National Democratic Front of Boroland (NDFB).

Result: Atleast 6 dozen militants belonging to the groups mentioned were nabbed and some of their camps were destroyed during operation.

Background: In June 2015, days after NSCN-(K) militants killed 18 armymen in Manipur, Indian Army carried out an operation against the militants near Indo-Myanmar border areas. Since then operations against militants are actively undertaken. According to data provided by security agencies, there were more than 50 camps of insurgent groups from north-east in Myanmar till 2018.

The ‘Operation Sunrise 1’ was conducted 3 months ago (February 2019) along the Indo-Myanmar border, during which a number of camps of north-east-based militant groups were busted.

In 1st phase of operation, Indian Army targeted members of Arakan Army (Myanmar’s insurgent group) who were opposed to Kaladan Multi-Modal Transit Transport Project, which is viewed as India’s gateway to Southeast Asia.

Boundary: Four Northeast states of India share a 1,640-km long border with Myanmar with Myanmar namely, Arunachal Pradesh, Mizoram and militancy-hit Nagaland and Manipur. Thus, Myanmar is one of the strategic neighbours of India.

For much efficient guarding of sensitive border, India for long has been pushing for a deeper coordination between armies of two countries while.

Kaladan Multi-Modal Transit Transport Project: In April 2008, India entered into a framework agreement with Myanmar to facilitate implementation of Kaladan Multi-Modal Transit Transport project which once completed project will help connect north-eastern state of Mizoram with Sittwe Port in Myanmar’s Rakhine state. While on Indian side, work is on to extend Aizawl-Saiha National Highway (in Mizoram) by 90 km to international border at Zorinpui.

Way Ahead: The armies of two countries might launch 3rd phase of operation, depending on intelligence inputs and the ground situation.