In Open Defecation (OD), people use fields, forests, rivers, canals, drains, bushes, roads, railway tracks etc. to defecate instead of use of toilets.

Prevalence of Open Defecation around the World

In terms of total number of persons practicing OD, India is top country of the world with around 626 million people defecating in open. As per 2012 WHO data, the top 5 countries in term of number of OD practicing people are India (626 million), Indonesia (63 million), Pakistan (40 million), Ethiopia (38 million) and Nigeria (34 million). 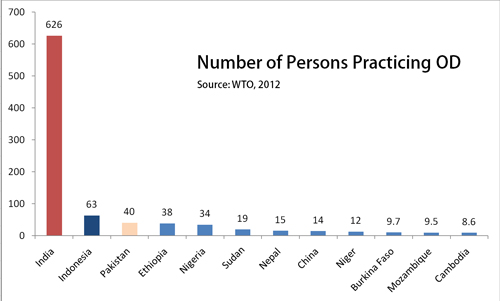 In 2017 also, around 600 million people were defecating openly in India.

Prevalence of Open defecation in India

According to the NFHS-2015-16 (released in December, 2017), the percentage of households practicing open defecation in India decreased from 55 percent in 2005-06 to 39 percent in 2015-16. Open defecation is still practiced by around 38% of the population. Highest prevalence of OD in India is in Jharkhand 52.4%, followed by Odisha, Madhya Pradesh and Bihar. A few states in India however, have been declared OD free due to constant government efforts towards sanitation and raising awareness on hygiene.

The problem of OD is directly linked to high child mortality and other problems including extreme poverty around the world. The well established link between extreme poverty and lack of sanitation resulted in the “ending OD” as one of the components of eliminating poverty and one of the indicators to measure progress towards Sustainable Development Goals.

The major global efforts around the world to end OD are as follows:

Talking about toilets and open defecation was a taboo till the dawn of 21st century. On global level, sanitation and personal hygiene was first included in the Goal-7 (Ensure environmental sustainability) under the millennium development goals. Under this goal, Target 7-C was to halve, by 2015, the proportion of the population without sustainable access to safe drinking water and basic sanitation. However, this goal of bringing proportion of people without access to sanitation from 51% to 25% by 2015 was not achieved. As per the Joint Monitoring Programme (JMP) report of WHO and UNICEF (July, 2017), around 3 in 10 people worldwide, or 2.1 billion, lack access to safe, readily available water at home, and 6 in 10, or 4.5 billion, lack safely managed sanitation.

In order to decrease global inequalities, the new Sustainable Development Goals (SDGs) call for ending open defecation and achieving universal access to basic services by 2030. The Goal 6 of SDGs is to ensure availability and sustainable management of water and sanitation for all. It has two targets:

Joint Monitoring Programme (JMP) is a combined effort of WHO and UNICEF to monitor progress on drinking water, sanitation and hygiene around the world. It had released its first report in 2017 presenting first global assessment of “safely managed” drinking water and sanitation services. As per this,  2.1 billion people aroud the world lack access to safe, readily available water at home, and 4.5 billion lack safely managed sanitation. Currently, JMP is monitoring progress towards SDGs Targets 6.1 and 6.2.

Acronym WASH stands for Water, Sanitation and Hygiene. WASH related interventions have got worldwide attention and are expected to reduce illness and death, and also reduce poverty and improve socio-economic development. WASH got major attention during UN International Year of Sanitation in 2008 helped to increase attention for funding of sanitation in WASH programs of many donors. Today many international organizations and NGOs as well as domestic governments are paying attention to WASH related development interventions. For example, UNICEF includes WASH initiatives in their work with schools in over 30 countries.

Efforts of India to end OD

Successive central governments in India have taken measures to address this problem since 1986. The government launched Central Rural Sanitation Programme (CRSP) in 1986 to construct individual sanitary latrines for the personal use of BPL population. During previous NDA Government under Atal Bihari Vajpayee, the Total Sanitation Campaign (TSC) was launched in 1999 to eradicate open defecation by 2010. UPA Government renamed Total Sanitation Campaign to “Nirmal Bharat Abhiyan” (NBA) with the aim to accelerate sanitation coverage in rural areas to achieve the vision of ‘Nirmal’ Bharat by 2022. The current government has launched Swachh Bharat Abhiyan (SBA) to achieve an open defecation-free (ODF) India by 2019. All of the above schemes have done miserably in achieving their goals. The Swachh Bharat Abhiyan is doing good but its inability to change behavior is likely to fail to achieve its quantified goals.

There are two reasons viz. poor infrastructure and behavioral issues.

Access to toilets with running clean water is a big issue to tackle. Generally toilets are built and no focus is given to water supply in them so, they are just waste of taxpayer money.  Poor quality, inadequate numbers, poor maintenance of toilets and lack of water supply in public toilets has made the condition of most of our public toilets such that users prefer to defecate in the open. In other words, blame for open defecation due to poor infrastructure must rest squarely at the government’s door.

The most important cause is the attitude of the people towards latrine usage. Most of the researches done on use of latrines have come up to the same conclusion that the people who have government latrines in their houses do not use them on the regular basis. Even when people have access to privately build latrines, they perceive few health benefits of using a latrine. Studies show that in 20-49% of even those households which have toilets within the house, at least one member defecates in the open. Therefore latrine construction is not enough.

What should be done?

The centralized and top-to-bottom approach of subsidy-focussed and construction driven approach should be changed to grassroots level planning, Community Led Sanitation approach, and encouraging people to build their own toilets for their own benefits. Toilet building and making people to actually use them are two different things. In rural areas, open defecation is a norm and is embedded in the cultural practice of people. The celebrities, sportsmen, cinema and TV can do a lot in this direction. In fact, some of the movies (Toilet-Ek Prem Katha) and campaigns (Darwaja Band Campaign) have left a remarkable impact on people.

In last few years, several states have launched ODF campaigns and have been successfully declared as ODF states. Kerala, Himachal Pradesh and Sikkim were the first states to be declared open defecation free under the Swachh Bharat Abhiyan. Next in the league are Uttarakhand and Haryana. On January 1, 2018, Arunachal Pradesh emerged as the second State in the Northeast, after Sikkim, to be declared Open Defecation Free.