On which date, Mahatma Gandhi delivered his first and only speech on All India Radio? 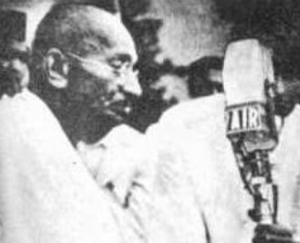 Mahatma Gandhi had delivered his first and only speech on All India Radio on November 12, 1947. He had addressed to the refugees camping in Kurukshetra, whom he was not able to personally visit.

However, this was second broadcast of Gandhi on radio. His first radio broadcast was to America from the Columbia Broadcasting Service Network from Kingsley Hall, London, where he stayed as guest of Muriel Lester during Second Round Table Conference.

His second address on Radio was on November 12, 2017 on the festival of Diwali and it included a visit to Radio Broadcasting Studio. He humbly accepted to be taught by the Radio technicians and spoke in clear Hindustani language for around 20 minutes addressing “my suffering brothers and sisters of Kurukshetra camp”. This was his first and last message on AIR.

In commemoration of that day, a snippet of that speech is played and that day is celebrated in India as Public Service Broadcasting Day.