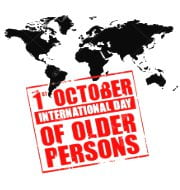 The International Day of Older Persons is observed on October 1 every year across the world.

The UNGA designated October 1 as the International Day of Older Persons on December 14, 1990. It came as the result of the Vienna International Plan of Action on Ageing, which was adopted by the World Assembly on Aging in 1982. In 1991, the UNGA adopted the United Nations Principles for Older Persons. In 2002, the Second World Assembly on Ageing adopted the Madrid International Plan of Action on Ageing to respond to the opportunities and challenges concerning the elderly population in the present century and to promote an inclusive development of a society for all ages.

Older people across the world

Globally, there were 703 million people aging 65 and above in 2019. East and South East Asia has the largest number of elderly people, followed by Europe and North America. Over the next 3 decades, the number of older persons across the world is expected to more than double, surpassing the figure of 1.5 million in 2050. All regions across the globe are projected to witness a rise in the size of older population between 2019 and 2050. The highest increase is going happen in Eastern and Southeastern Asia, reaching 573 million in 2050. The fastest increase of older persons’ population is going to happen in Northern Africa and Western Asia.