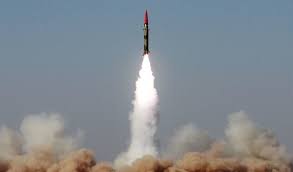 The Pakistan Army’s media wing, Inter-Services Public Relations (ISPR)  announced that the training launch was part of the Field Training Exercise of the Army. The training aimed to rehearse the combat readiness through operational procedures during both the day and night. Pakistan earlier test-fired the Ghaznavi missile in the month of August last year and this is its second successful launch. The ballistic missile Ghaznavi is also known as Hatf-3.

Ghaznavi has been developed by the Pakistani defense and Aerospace Contractor, National Development Complex and has been named after the Turkic conqueror form the 11th century, Mahmud of Ghazni. The earlier version of the missile (non-nuclear capable) was inducted in the Pakistan army in 2012. Earlier on 29th August 2019, Pakistan Army had test-fired the nuclear-capable ‘Ghaznavi’, for which no media announcements were made from the ISPR regarding the success of the test.