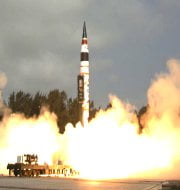 Nuclear capable surface-to-surface Agni-IV missile was successfully test-fired by the Indian Army’s Strategic Forces Command (SFC).
This was overall the fifth test of the Agni IV missile and earlier it had undergone 1 failed and 4 successful tests over the past five years. The last successful test was conducted in December 2014.
Test facts