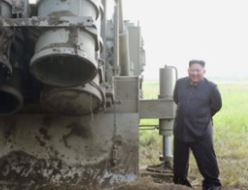 The Korean Central News Agency which is the official broadcaster of North Korea has reported that North Korean leader Kim Jong-Un oversaw the test-firing of a “super-large multiple rocket launcher”.

The launches happened just hours after it signalled a new willingness to resume stalled denuclearisation talks with the United States. The North Korean diplomat was quoted as saying that his country was willing to sit with the US side for comprehensive discussions of the issues we have so far taken up” later this month, at a time and place to be determined. The tests are seen as a pressure tactic of the North Korea to gain a favourable deal in the negogiations.

Denuclearization of the Korean peninsula

North Korean leader Kim Jong Un and US President Donald Trump adopted a vaguely-worded statement on the “complete denuclearisation of the Korean peninsula” at their first summit in Singapore on June 2018. But little progress was made since then on dismantling Pyongyang’s nuclear programme.

Both Trump and Kim had agreed to restart working-level talks during a meeting at the Demilitarized Zone dividing the Korean peninsula in June 2019. but those talks have yet to begin.