NITI Aayog and Ladakh Administration entered into an MoU 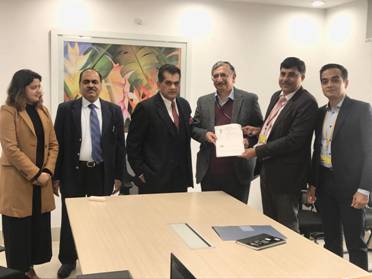 The policy think tank for the Government of India, NITI Aayog and the administration of the newly formed Union Territory of Ladakh has entered into a Memorandum of Understanding (MoU) on Friday, 17 January 2020 under which through the key initiative of NITI Aayog-Development Support Services to States for Infrastructure Projects (D3S-i), the Union territory Administration will be supported for the development of key infrastructure in Ladakh. In the presence of Amitabh Kant (CEO, NITI Aayog), the MoU was signed by Dr. Yogesh Suri (Senior Adviser, NITI Aayog) and by Umang Narula (Adviser to the Lieutenant Governor of Ladakh under which high-impact priority projects will be identified and structural level issue will be addressed through by creating unique models of development. For the identification and development of projects, especially in solar energy, basic infrastructure, and tourism, a dedicated team of professionals is likely to be stationed at Ladakh. The MoU is a part of the commitment by NITI Aayog to the Administration of Ladakh made earlier for assisting in creating a strategic plan by identifying projects and providing end-to-end support for the identified projects.