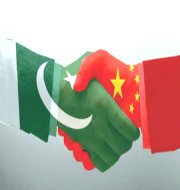 On November 30, 2020, General Wei Genghe of the People’s Liberation Army visited the Pakistani army headquarters located at Rawalpindi. During the meet the countries discussed matters of regional security, mutual interest and enhance bilateral defence collaboration. They also discussed about the China Pakistan Economic Corridor in which the Pakistani army has a greater role.

The Countries signed a new Memorandum of Understanding related to Defence.  The agreement mainly focused on capacity building of the Pakistani army and is a continuation of a defence agreement signed in 2019. The agreement was signed behind closed doors and the details have been kept secret.

It is to be noted that the military to military relations between China and Pakistan have been growing lately.

The CPEC aims to link Gwadar of Pakistan with the Xinjiang province of China through was network of Railways and Highways.

The main concern of India is that CPEC passes through the Pakistan occupied Kashmir region. Through CPEC China plans to shorten its supply lines through Gwadar port. According to India an extensive presence of China in the region will undermine India’s influence in the Indian Ocean.

Also, India shares trust deficit with China and Pakistan due to a history of conflicts with the countries.

China is constantly increasing its presence in South, West and Central Asia. On the other hand, Pakistan is currently an inevitable lynchpin in the South Asian politics. Also, the cordial relations between Pakistan and United States has faded since the assassination of Osama Bin Laden. Slowly, the vacuum created by the fading US support in Pakistan is being filled by China and Russia.