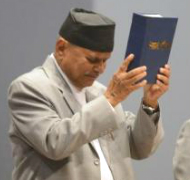 It is the ruling political party in Nepal. The party is considered as the largest communist party in South Asia while the third largest in Asia. The party was founded on May 17, 2018. It was formed after the unification of two leftist parties namely the Communist Party of Nepal (Unified Marxist–Leninist) and Communist Party of Nepal (Maoist Centre). This party is the largest political party in House of Representatives and National Assembly. It is also the largest among all provincial assemblies except No. 2. Former Prime Minister of Nepal Pushpa Kamal Dahal is currently serving as the chairmen of the party alone after PM Oli has been expelled. Following the removal of PM Oli, the NCP has split into two divisions.