Neowise: A Rare Comet to be visible in the Indian Skies 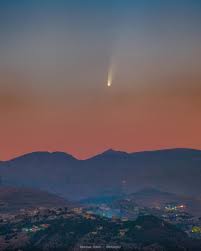 The comet was discovered by Near Earth Wide-field Infrared Survey Explorer (NEOWISE) in March 2020. The comet is to be visible in the north west sky.

Th Neowise comet is currently hurtling through space nearly 200 million kilometres away from the earth. The comet is 5 km wide and was formed 4.6 billion years ago.

The Comet takes 6,800 years to complete one revolution around the sun. The comet gains its light and heat energy from the sun. The debris of the comet forms a tail that stretches out to millions of kilometres. Every time a comet passes the sun, it loses some of its materials and will eventually disappear.