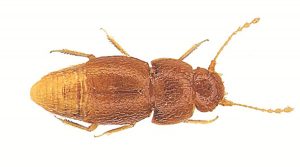 Scientists at the British Natural History Museum in London, UK have officially named a tiny species of beetle that was discovered more than 50 years ago as ‘Nelloptodes gretae’, to honour the 16-year-old Swedish climate activist’s ‘outstanding contribution’ in raising global awareness of climate change.

It is an arthropod, which has no eyes or wings and rather has a small pit between where the eyes should have been. It is a tiny species of beetle, pale yellow and gold, with less than 1mm long. It belongs to Ptiliidae family, which is made up of some of the world’s smallest beetles.

The beetle was first found in 1965 by British naturalist Dr William C Block in Nairobi, Kenya. The samples taken in Kenya are stored in British Natural History Museum.

In general the biological name comprise of two words- one for genus and second for species i.e. while the species name ‘gretae’ derives from Greta, the genus Nelloptodes too is a new genus. Traditionally, it is the species name that scientists coin to honour a prominent personality, and sometimes even a friend/ relative.