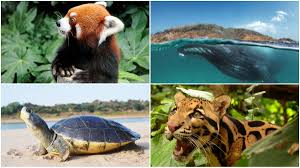 The standing committee of National Board for Wildlife (NBWL) has recently added four species- Northern River Terrapin, Clouded Leopard, Arabian Sea Humpback Whale and Red Panda into Centre’s Recovery Programme for Critically Endangered Species. They were added on the recommendation by Wildlife Division of Ministry of Environment and Forests and Climate Change (MoEFCC).

Norther River Terrapin: It is species of riverine turtle found in rivers that flow in Eastern India. It is hunted for its meat and carapace. It is native of Bangladesh, Cambodia, India, Indonesia and Malaysia.
Clouded Leopard: It is found in Himalayan foothills. It is threatened due to habitat loss, poaching for its skin and is also as a live pet trade. The IUCN in its Red List assessment of 2016 has categorized Clouded Leopard as ‘Vulnerable’ and indicating declining trend in its population.
Arabian Sea Humpback Whale: It is a species found in all of major oceans. This species migrates from the Oman coast through the Arabian sea, along the Indian coasts till the Sri Lankan coast. Ship strikes, unforgiving fishing gear and siesmic exploarations pose grave threat to it.
Red Panda: It is closely associated with montane forests with dense bamboo-thicket. It is found Sikkim, West Bengal and Arunachal Pradesh. It is poached for its meat, and for use in medicines, and as a pet. The IUCN has categorized Red Panda as ‘Endangered’. As per its Red List assessment of 2015, population of this species is decreasing.