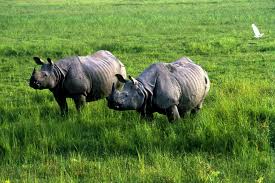 Every year National Wildlife Week is celebrated in India between October 2nd and October 8th. It is being celebrated since 1954. The main objective of celebrating the day is to save the lives of Indian animals by taking critical steps. The week is celebrated under the following theme
Theme: RoaR (Roar and Revive) – Exploring Human-Animal Relationships

Though the day is celebrated by several organizations all over India, the celebrations are mainly organized by National Board of Wildlife.

What are the objectives?

India is one of the 17 mega diversities of the world. Therefore, it is important for India to conserve and protect its biodiversity. The GoI has launched several programmes to conserve its wildlife. Some of the key programmes are as follows

The acts that conserve biodiversity of India are as follows

Out of these, 12 met in 2002 and adopted Cancun Declaration. India is one amongst them to sign the declaration. Later, three more joined.

These 17 countries contribute to 70% of terrestrial biological diversity of the mother earth occupying just 10% of her surface.

Criteria for a mega-diverse country

A Country is called a mega-diverse country under following conditions