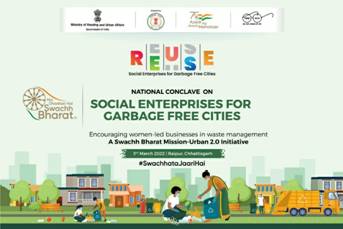 On 3rd March 2022, a National conclave on Social Enterprises for Garbage Free Cities: Encouraging Women Entrepreneurs in Waste management in Raipur is being organized by the Swachh Bharat Mission-Urban 2.0 which falls under the ambit of the Ministry of Housing and Urban Affairs (MoHUA), in collaboration with the Chhattisgarh government.

The Swachh Bharat Mission – Urban 2.0 was launched on October 1st 2021, with the goal of achieving Garbage Free Cities. The implementation of this mission is being done under the principles of circular economy and waste from wealth for maximising the recovery of resources. The Mission is focusing on developing an eco-system for opening up entrepreneurial opportunities in the sanitation sector through social enterprise growth, particularly among the economically disadvantaged and integrating women empowerment.