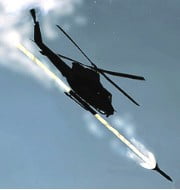 Indigenously developed Nag anti-tank guided missile was successfully tested from a helicopter platform.
Test: During the test, three-round trial of helicopter-launched Nag (HeliNa) missile were conducted at a Chandhan firing range in Jaisalmer in Rajasthan. The two of the trials successfully had hit the target while one had reportedly missed the target.
Facts about Nag anti-tank guided missile