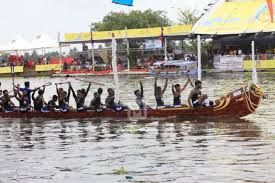 The event was inaugurated by Pinarayi Vijayan, Chief Minister of Kerala. Renowned cricketer Sachin Tendulkar was the chief guest of the event.

Nadubhagam Chundan: More than 6 decades after victory in exhibition race held in 1952, which was later declared the 1st edition of regatta, Nadubhagam Chundan, rowed by Pallathuruthy Boat Club lifted Nehru trophy for 1st time. Pallathuruthy Boat Club has thus emerged winner in maiden race of inaugural edition of Champions Boat League (CBL). The CBL (championsboatleague.in), which is billed as a game-changing initiative, seeks to professionalise Kerala’s largely scattered snake-boat races, while commercialising them without losing conventional spirit of the sport.

Nadubhagam Chundan (snakeboat) won the 1st round of CBL and 9 points, by clocking 4.24 minutes to cover distance of 1,050 metres, leaving behind their fellow competitors.

The next leg of race will be held on 7 September at Thazhathangadi near Kottayam. CBL was originally slated to begin on 10 August but it got rescheduled due to heavy rains that wreaked havoc across state.

It was instituted to commemorate the visit of country’s first Prime Minister Jawaharlal Nehru to the area and his boat ride in Alappuzha lake in 1952.

It was on Nadubhagam Chundan that PM Nehru hopped on after snakeboat came 1st in an exhibition race during his visit to Alappuzha. Later on his return to New Delhi, PM Nehru donated a silver trophy, a replica of a snakeboat.