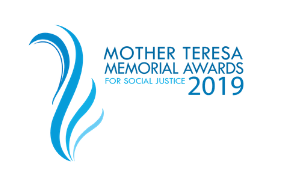 This year’s Mother Teresa Memorial Awards for Social Justice (MTMA) dedicated to the memory of the Saint of Kolkata, went to a number of people from India and abroad. The awards will be presented to the laureates on 3 November 2019 in Mumbai.

The 2019 edition of award recognises the exemplary and humanitarian work done by social activists in fields and issues related to modern forms of slavery and for victim rehabilitation. The awards are in currently in its 15th year.

Kailash Satyarthi, India: For fighting child labour and trafficking in India and Southeast Asia. He is the founder of Bachpan Bachao Andolan. He also won the Nobel Peace Prize (2014) for his work.

Robert Bilheimer, United States: For using his skills as a filmmaker to raise awareness about modern forms of slavery and inspiring fight against them.

Junior Nzita Nsuami: For leading an international campaign through United Nations (UN) against the use of child soldiers in war. He is a former child soldier.

Ajeet Singh: For his efforts in creating the first red-light area in India free ​​of commercial sexual exploitation of children.

Alezandra Russell: For helping neglected and ignored young boys in red-light districts of Thailand. He is the founder of Urban Light.

Hasina Kharbhih: For rescuing and empowering over 72,000 vulnerable victims from fate of human trafficking. She is the founder of Impulse Empower.

Rob Williams: U. For persistently protecting and supporting children in armed conflicts in some of the world’s most hostile regions. He is CEO of WarChild UK.

Priti Patkar: For his holistic approach in trying to abolish intergenerational prostitution. She is an activist and social worker from India.

PRERANA: For their holistic approach in their attempts to abolish intergenerational prostitution and protecting children vulnerable to commercial sexual exploitation and trafficking.

Doctors Against Forced Organ Harvesting (DAFOH)– USA: For raising awareness over the decades in medical community and civil society about unethical organ harvesting (especially in China).

Free A Girl: for uniquely reintegrating former sex workers into civil society by training them to become future advocates. It is a relief organization dedicated to free young girls from forced prostitution as well as prosecutes offenders.

JEEVIKA (Jeeta Vimukti Karnataka): For freeing over 30,000 bonded labourers and for its commitment to total eradication of practice in Karnataka.

Office for Rescue of Yazidis: For working in one of the world’s most hostile regions to rescue all vulnerable Yazidi women and girls from evil clutches of Islamic State (IS) group.