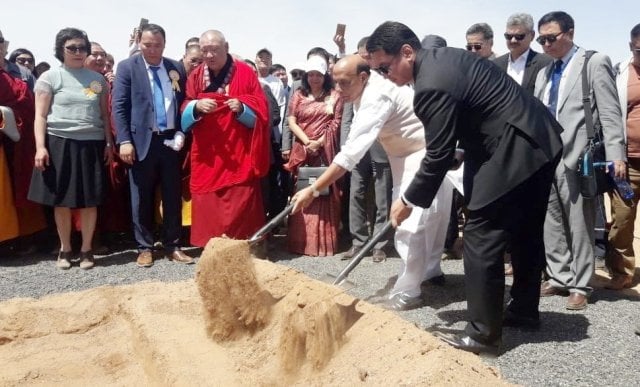 The refinery will be capable of processing 1.5 million tonnes of crude oil per year. That is about 30,000 barrels per day (bpd). It planned for completion in late 2022. On completion, it will meet all of the nation’s demand for gasoline, diesel, aviation fuel and liquefied petroleum gas (LPG).
The cost of the refinery is estimated at $1.35 billion, and it will include a pipeline and its own power plant. Its financing is part of $1 billion soft credit line agreement between Mongolia and Export-Import Bank of India, made during 2015 official visit by Indian Prime Minister Narendra Modi.
The refinery will process Mongolia’s own crude oil, which is now sold to China. The large landlocked country wedged between giants China and Russia had produced 7.6 million barrels of oil in 2017, about 21,000 bpd, amounting to 6% of its total export earnings.

The strategically important oil refinery will make Mongolia independent from energy imports and stabilise fuel and commodity prices in its domestic markets. It is expected to boost Mongolia’s gross domestic product (GDP) by 10%. It will end country’s dependence on Russian fuel as it imported almost 1.5 million tonnes of oil products in 2017, virtually all from Russia, thus diversifying its sources of oil products from the current single source. The refinery is expected to increase Magnolia’s crude oil output, helping it to increase its export earnings. The refinery project is also considered as important milestone in bilateral ties between India and Mongolia.