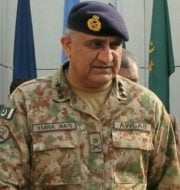 Lt. Gen. Qamar Javed Bajwa was appointed Pakistan’s new army chief (or Chief of Army Staff , COAS). He will succeed Gen. Raheel Sharif who has formally retired from service.
He was elevated to the rank of four-star general by the Prime Minister Nawaz Sharif.
The post of Army chief is the most powerful in Pakistan. The Pakistani army is world’s sixth-largest army by troop numbers. The army has played a prominent role in Pakistan’s politics since its independence in 1947 and so far has staged three coups.

Note
Under the constitution of Pakistan, the prime minister is the head of the country’s executive. But the army controls domestic-security issues, Inter-Services Intelligence (ISI), the spy agency and the nation’s defence and foreign policies.