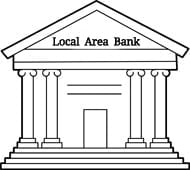 Local Area Banks were set up as per a Government of India Scheme announced in August 1996. The intention of the government was to set up new private local banks with jurisdiction over two or three contiguous districts. The objective of establishing the local area banks was to enable to mobilization of the rural savings by local institutions and make them available for investments in local areas. Thus, the overall idea was to bridge the gaps in the credit availability in the rural and semi-urban areas, thereby strengthening the institutional credit mechanism in such areas.

Pursuant to announcement of this scheme, RBI received some 227 applications, but most of them were rejected. RBI approved established of only 10 Local Area Banks but out of them only 4 are into existence as of 2015.

There are only four Local Area Banks (LAB) in India, which exist in the form of Non-scheduled banks. They are as follows:

This bank was established on 27th December 1999. Its area of operation includes three contiguous districts viz. Krishna, Guntur and West Godavari. Its head office is located at Vijayawada in Andhra Pradesh.

This bank was established on 14th January 2000. Its area of operation includes three districts viz. Jalandhar, Kapurthala and Hoshiarpur in Punjab. The head office is at Phagwara (Punjab).

This bank was established on 28th February 2001 with an area of operation comprising three contiguous districts of Mahbubnagar in Andhra Pradesh and Raichur and Gulbarga in the state of Karnataka with its head office at Mahbubnagar(Andhra Pradesh).

This is smallest Local Area Bank with only 8 branches. Its head office is in Kolhapur.

Further, a South Gujarat Local Area Bank Ltd was established in 2000 with headquarters at Navsari in Gujarat. This bank failed to maintain CRR and SLR and suffered net losses in consecutive years. Its promoters were found to be involved in scams. Consequently, this bank was merged with Bank of Baroda in 2004.   Further, one more local area bank viz. Vinayak Local Area Bank Ltd., Sikar in Rajasthan was established on 21st October 2000. But RBI cancelled its license in 2002 due to major irregularities.