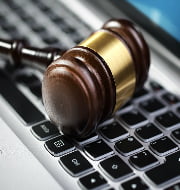 The Union Law ministry has approved Fugitive Economic Offenders Bill, 2017 to empower government to confiscate property of economic offenders and defaulters who flee India.
The Bill seeks to deter economic offenders from evading the process of Indian law by fleeing the country. It was drafted in pursuance of Finance Minister Arun Jaitley’s 2017-18 Budget speech promising legislative changes or even new law to confiscate the assets of such fugitives. The Finance Ministry had prepared the draft Cabinet note on the bill and sought the law ministry’s opinion on it.

It defines fugitive economic offender as any individual against whom warrant for arrest in relation to economic offence has been issued and person has left the country and refuses to return to India to face criminal prosecution.  The burden of proof for establishing that an individual is fugitive economic offender will be on authorities.
The proposed bill will be applicable in cases where the value of offences is over Rs 100 crore. It will allow Financial Intelligence Unit (FIU), the premier technical snoop wing under the finance ministry, to file an application for declaration of fugitive economic offender for confiscation of their assets.
The bill entrusts responsibility to try such cases to the courts under Prevention of Money Laundering Act, 2002 (PMLA). The bill has provision for appointment of an administrator to dispose off property of fugitive offfender to pay off the creditors. Besides, it has provisions to override provisions of other existing laws.

It wants Saving Clause to be incorporated in the Bill before it is introduced in Parliament. Saving clause provides for certain exception(s) in a statute. It enables repealed law to be in force with respect to some existing rights as provisions of the proposed bill has  bearing on the provisions of existing laws.
The existing laws under which such fugitive economic offender are tried include Recovery of Debts Due to Banks and Financial Institutions Act (RDDBFI), Securitisation and Reconstruction of Financial Assets and Enforcement of Security Interest Act, 2002, (SARFESI) and Insolvency and Bankruptcy Code (IBC).

Need for such Law

In the recent past, there have been instances of big-time offenders, including economic offenders, fleeing the country to escape reach of jurisdiction of Indian courts. Most recently, Vijay Mallya, chief of terstwhile Kingfisher Airlines who owes over Rs 9,000 crore to various Indian banks, had fled India to escape legal proceedings in connection with the loans. Such cases have several deleterious consequences as it hampers investigation in criminal cases, wastes precious time of courts of law and undermines the rule of law of the country.