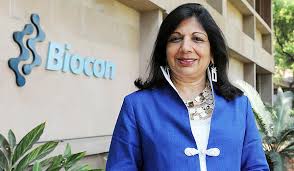 Indian entrepreneur and the Chairperson and Managing director of Bio Limited, Kiran Mazumdar-Shaw was conferred with the highest civilian honour of Australia- ‘Order of Australia’ on Friday, 17th January 2020 at an event organized at the Leela Palace in Bengaluru. The founder of Biocon was inducted as an Honorary member by the Australian High Commissioner to India, Harinder Sidhu, and said that the highest civilian honour of Australia is a recognition to the efforts made by Kiran Mazumdar-Shaw and her immense contribution in advancing the bilateral relationship between the two countries, especially for promoting the educational and commercial links. Kiran became the fourth Indian citizen after Mother Teresa (first to be honoured), Soli Sorabjee(former Attorney General) and Sachin Tendulkar to be conferred with the honour.

Order of Australia was instituted in 1975 for recognizing the achievements of the Citizens of Australia for their meritorious service and other country citizens for their contribution towards developing Australia.