Why is Kerala opposing the leasing out of Thiruvananthapuram Airport to Adani Enterprises? 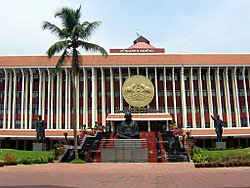 Earlier Kerala was given the assurance of its intervention in the matter of privatization or leasing of Thiruvananthapuram airport but the recent announcement came without their prior consent. That is why Kerala has been opposing the bill. The state declared the operation and management of the airport should be handed over to the Special Purpose Vehicle (SPV) in which the Kerala government has a stake.