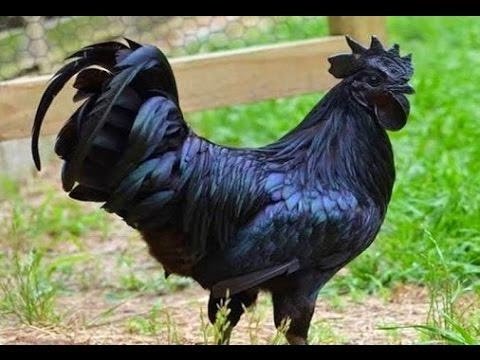 Kadaknath or Kali Masi (flowl with black flash) is a chicken breed produced mainly in Chhattisgarh and Madhya Pradesh states of India. This highly demanded chicken is popular because of its good-tasting black meat thought to have medicinal properties.

The Kadaknath fowl is completely black with black plumage having greenish iridescence, black legs, beak, tongue, comb and wattles. Apart from its meat, its bones and most organs are also black. The back colour is mainly due to deposition of the melanin pigment. A Kadaknath chicken contains 25-27 per cent of protein in comparison with other breeds of chickens that contain 18 per cent protein. This breed is also known for its high iron content. The fat and cholesterol content is lower compared with other chicken.

Since the meat of this fowl is considered to be of medicinal quality, it is in very high demand. To save the fowl from extinction, the Madhya Pradesh government had started a Kadaknath Poultry breeding programme to provide financial support to poor people engaged in poultry of Kadaknath.

In March, 2018, the Madhya Pradesh government came up with mobile application to market Kadaknath meat. Via this app, the people can place orders for Kadaknath chicken from anywhere. Availability of Kadaknath chicken with the cooperative societies can also be seen on this app. This app is slated to provide marketing platform to 430 members of 21 societies in Jhabua and Alirajpur districts and that more societies are being added to this platform.

Kadaknath has become a controversy between Madhya Pradesh and Chhattisgarh when both the states staked claim over its nativity. Both the states had filed applications with the Geographical Indication Registry office in Chennai for the ‘GI tag’. Currently, GI tag has not been given to Kadaknath and most likely, Madhya Pradesh will get GI tag because Kadaknath has been traditionally reared in Jhabua district.