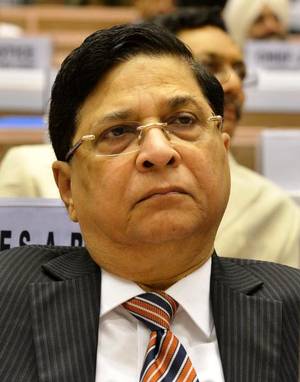 President Ram Nath Kovind has appointed Justice Dipak Misra (63), senior-most judge of the Supreme Court as the next Chief Justice of India. He will be 45th CJI and succeeds Justice JS Khehar.
He will have tenure of over 13 months till October 2018. He will be the third person from Odisha to be appointed the CJI, after Justices Ranganath Misra and G B Pattanaik.

Justice Dipak Misra was born on 3 October 1953.  He is the nephew of Justice Ranganath Misra who was CJI from September 1990 – November 1991.
He had enrolled as an advocate in 1977 and had practised in constitutional, civil, criminal, revenue, service and sales tax matters in the Orissa High Court and Tribunals before was elevated to the High Court bench.
He was appointed Additional Judge of the Orissa High Court in January 1996 and later was transferred to the Madhya Pradesh High Court in March, 1997 where he became a permanent judge.
In 2009, Justice Misra was elevated as Chief Justice of the Patna High Court and later as the Chief Justice of the Delhi High Court in May, 2010. He was elevated as a Judge of the Supreme Court in October 2011. In Supreme Court he has already presided over several key cases and verdicts.
He had led the SC bench which rejected the 1993 Mumbai serial blasts convict Yakub Memon’s appeal to stop his execution. He also had led a three judge SC bench which had upheld the death sentence awarded to the four convicts of the Nirbhaya rape case in May, 2017.
He also has given significant judgment directing states and Union Territories to upload First Information Reports (FIRs) on websites within 24 hours of their registration for enabling accused and others to file appropriate pleas in the courts for redress.