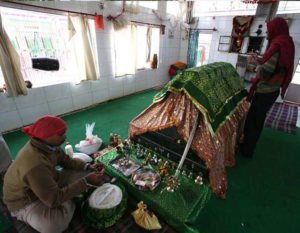 At the annual Chamliyal mela 2019, even as devotees thronged Chamliyal border shrine along International Border in Jammu and Kashmir (J&K), there was no traditional exchange of ‘chadar’ or ‘shakkar’ (sacred clay) and ‘sharbat’ (water) between Pakistan rangers and Indian border guarding force for 2nd successive year (earlier in 2018).

Exchanging shakkar and sharbat is about 70-year-old practice betwenn India nad Pakistan. Since 1947 partition famous fair at Baba Chamliyal shrine was cancelled for first time in 2018  in wake of tension between India and Pakistan following snipping of four BSF soldiers including an Assistant Commandant by Pakistani Rangers in area a week before mela.

It is a famous fair which takes place at shrine of Baba Dalip Singh Manhas, a saint popularly known as Baba Chamliyal, after whom the village on zero line in Samba district’s Ramgarh sector is named. He supposedly lived over 300 years ago and is revered by people of all faiths.

Mela is held for 3 days at shrine complex on Indian side and is also held for a week on opposite side of border in Saidanwali village of Sialkote district in Pakistan. This shrine is biggest example of communal harmony and people of both sides of international border offer their prayers together.

Fair has become popular since November 2003 after a ceasefire and parallel peace initiatives were undertaken by India and Pakistan.

Earlier till 1971, Pakistani nationals were allowed to come to Indian side of border to pay obeisance at shrine but after 1971 India-Pakistan war, this practice was stopped. Since then, only a delegation of Pakistan rangers comes to offer chadar at shrine and in return carries shakkar (sacred clay) and sharbat (water), from shrine for devotees in Pakistan. Many devotees claimed to have healed of their skin ailments after visiting Baba’s shrine.