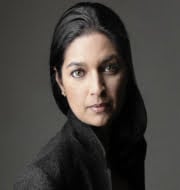 Indian American Pulitzer Prize-winning author Jhumpa Lahiri has won prestigious DSC Prize for South Asian Literature 2015. Fifth edition of this prize was announced at the Jaipur Literature Festival.
She has received the prestigious $50,000 DSC Prize for her book The Lowland. Her book was chosen by 5 judges from 75 books.
The Lowland is a tale of two Indian brothers during time of 1950’s in Calcutta. It depicts story of both brothers one who get involved in the Naxalite movement in the late 1960s and the other leaves for the United States.