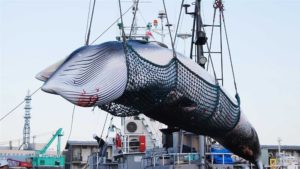 Japan has resumed commercial whaling after a period of 31 years, but will stay within country’s exclusive economic waters. Since 1988 Japan had switched to so-called research whaling. Though this move is slammed by anti-whaling activists but is welcomed by Japanese whaling communities.

Japanese boats will not be allowed to venture more than 200 miles (321km) off Japan’s Pacific coast.

For a very long period Whaling has proved to be a diplomatic flashpoint for Tokyo, which justifies practice as a Japanese tradition and thus it should not be subject to international interference.

Way Ahead: The fate of commercial whaling depends on whether whale meat is widely accepted by consumers since it won’t be getting as much subsidies as it used to get.

Why Whaling is important for Japan?

During the lean times after World War II, Whale meat was an affordable source of protein and in 1962 its consumption peaked at 223,000 tons. But later whale was quickly replaced by other meats and in 1986 Whale meat consumption was down to 6,000 tons. In fiscal 2017 whaling in Japan involved only a few hundred people and accounted for less than 0.1% of total meat consumption. But still whaling is kept synonymous with Japan’s traditional lifestyle.

It is an international body set up under International Convention for Regulation of Whaling (ICRW), which was signed in 1946 in Washington, D.C., United States (US).

IWC-JAPAN: In 1986, IWC adopted a moratorium on commercial whaling to protect the world’s last remaining whales. The ban on commercial whaling nevertheless allowed Japan an annual whale quota for scientific reasons which meant that Japan could undertake whaling only for scientific reasons. In December 2018 Japan announced its decision to withdraw from IWC.