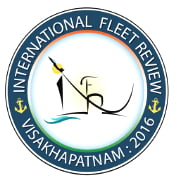 The International Fleet Review (IFR) 2016, an international military exercise hosted and conducted by Indian Navy was inaugurated in Visakhapatnam, Andhra Pradesh.
Theme of this edition on IFR is “United through Oceans” and its objective is to enhance mutual trust and confidence with neighbouring navies by inviting their ships to participate in the event.
Key facts

The last IFR conducted by the Indian Navy in 2001 in Mumbai, Maharashtra in which navies of 29 countries from across the globe had participated.