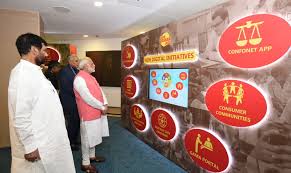 The First International Consumer Protection Conference on empowering consumers in new markets for South, South East and East Asian Countries was held in New Delhi from 26 to 27 October 2017. The theme of the conference was “Empowering Consumers in New Markets”. It was inaugurated by Prime Minister Narendra Modi.

The two day conference was organised by Department of Consumer Affairs, Ministry of Consumer Affairs, Food & Public Distribution in association with UNCTAD. The conference was attended by 1600 participants that included delegates from 19 countries from East, South and South-East Asia which account for majority of global consumers and share common challenges and experiences participated in it.

During inauguration of the conference PM Narendra Modi announced that new consumer protection law is on anvil to crack down on misleading advertisements and simplify grievance redressal mechanism. The main objective of new law will be to protect the rights of consumers.
It will replace previous Consumer Protection Act of 1986 by incorporating amended 2015 UN guidelines on consumer protection. It proposes to have Central Consumer Protection Authority with executive powers will be constituted for quick remedial action. It also establishes Consumer Dispute Redressal Commissions at every district, state and national levels.

UNCTAD is principal organ of United Nations General Assembly (UNGA) dealing with trade, investment, and development issues. It was established in 1964 and its permanent secretariat is in Geneva. Its primary objective is to formulate policies relating to all aspects of development including trade, aid, transport, finance and technology. It ordinarily meets once in four years.