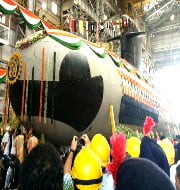 Indian Navy has launched Scorpene submarine INS Karanj at the Mazagon Dock Shipbuilders Ltd (MDL), Mumbai, Maharashtra. It the third Scorpene class submarine built by MDL under ambitious Project 75 of the Indian Navy.
INS Karanj has been named after older submarine as per Indian naval tradition that was in operation from 1969 to 2003. It served country for 34 years and was also part of operations in 1971.

INS Karanj has an overall length of 67.5 metres and height of about 12.3 metres. Its hull form, fin and hydroplanes are specifically designed to produce minimum underwater resistance.
In all, six scorpion submarines being indigenously built at MDL under Project 75 with help of French naval defence and energy company DCNS. The first of these, INS Kalvari was commissioned in December 2017 and second, INS Khanderi is undergoing sea trials. Remaining 4 submarines will be inducted gradually by 2020.
These are diesel-electric attack submarines equipped with anti-ship missile. The first four submarines will be conventional, while last two will be equipped with the Air Independent Propulsion (AIP) system, which will enable them to stay underwater for longer duration.
The state-of-the-art Scorpene submarines have superior stealth and ability to launch crippling attacks with precision-guided weapons. The attacks can be carried out with torpedoes both while submerged or on urface — in all war theatres, including the tropics.