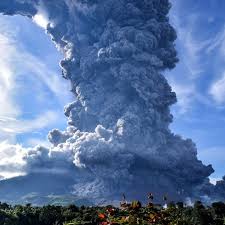 The aftermath of the Eruption

The people in the area should cover their face to protect themselves from the ash fallout and be careful of potential lava flows. The said ash-covered several villages around the area and up to an area of 20 km from the crater.

It is one of the 120 active volcanoes in the country and it is also prone to seismic activity on the Pacific Ring of Fire, a ring of volcanoes and moving fault lines surrounding the Pacific Ocean. Mount Sinabung had been inactive for centuries together but it first erupted recently in 2010. Since then, it has erupted multiple times till the recent one.

In 2014, an eruption from Mount Sinabung killed 16 people and in 2016, it killed 7 people because of the eruption. Tens of thousands were forced to leave their homes around the active volcano in the last few years.

What is an Active Volcano?

It is defined as an area near the Pacific Ocean where most of the volcanic eruptions in the world take place. It has seen a large amount of activity in recent years also. This area is home to around 450 volcanoes including three of world’s four most active volcanoes – Mount St. Helens in the USA, Mount Fuji in Japan and Mount Pinatubo in the Philippines. This area is also known as the circum-Pacific belt.