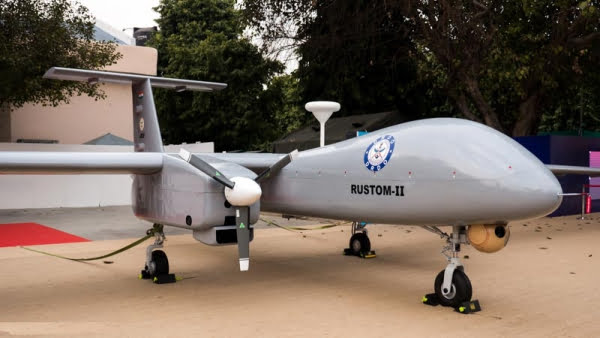 The Rustom 2 is a medium attitude long endurance indigenous drone. The Drone was tested at Chitradurga of Karnataka. During the test flight it achieved eight hours of flying at an altitude of 16000 feet. The capability of the Drone is to be increased to a height of 26000 feet and fly for 18 hours.

The Rustom 2 is a surveillance Drone. The Drone was developed to match the specifications of the Israeli unmanned aerial vehicle Heron. Currently India buys Heron drones from Israel. The push to the development of Rustom was brought in after Chinese cartographical claim on the line of actual control.

The Chinese have Loong II armed drones and has given four of them to Pakistan. These drones are currently used by the Pakistani government to protect CPEC (China Pakistan Economic Corridor) corridor and Gwadar port.

India is currently planning to upgrade the heron drones. The upgradation will include installing satellite communication link in the drones. This will remove the time delay in installing hard points on the wings of the missiles and Laser guided bombs. India is also in the plan of buying American MQ 9B drones instead of sea Guardian surveillance drones. This is because American MQ 9B drones are armed version.

India is currently strengthening its armed forces at a rapid rate to counter Chinese presence along the line of actual control.

On October 9, 2020, the US Secretary Mike pompeo announced that the Chinese are amassing fuse forces against India along the border. According to the US, the Chinese aggressive moves will push for closer ties between India and the US.